Hugo Award nominated musical/rock fiction author, Brian Paone, was born and raised in the Salem, Massachusetts area. His love of writing began through the medium of short stories at the young age of twelve. After almost twenty years of consistently writing short stories for only his friends and family to read, Brian’s first full-length novel, a personal memoir about his friendship with a drug addicted rock-star titled, Dreams Are Unfinished Thoughts, was published in 2007. Brian’s second novel, Welcome to Parkview, was published in 2010 and is a macabre journey through a cerebral-horror landscape. Brian’s latest novel, a time-travel romance titled, Yours Truly, 2095, was published in 2015 and follows a man who wakes up trapped in the future, to discover he’s been the victim of a time-travel conspiracy by a woman who is not what she appears to be. Along with his three novels, Brian has two published short stories: “Outside of Heaven,” which is featured in the anthology, A Matter of Words, and “The Whaler’s Dues,” which is featured in the anthology, A Journey of Words. Brian is married to a US Navy nurse and has four children. He is also police officer and has been working in law enforcement since 2002. Brian has ideas for enough future novels where he should be able to continue publishing books well past retirement. When Brian isn’t writing, he is playing or recording music with his band. He is also a self-proclaimed roller coaster junkie, and his favorite color is burnt-orange. For more information on all his books and music, visit www.BrianPaone.com

You can listen to ‘Outside of Heaven’ for free, simply by clicking this link: https://www.youtube.com/watch?v=XGB_3naL1N4

(NOTE: Chris isn’t part of the group anymore so I took that part out) Brian Paone is dedicated to helping other authors to realize their dreams and runs the Facebook Page ‘Fiction Writing.’ If you’re interested in an online community that is supportive and fun ask to join the Fiction Writing group to share your work, get feedback, get tips and learn from other’s success and failures check it out here:

All 3 of Brian’s published novels are available in paperback, eBook, and audiobook.

Thanks for joining us at StarkLight Press today, Brian!

I guess my first question is ‘author and musician’? Those are two difficult skills in one Brian shaped package! What sort of musician are you and do you multi-task in this sphere?

How do you find time to write as well as being a Police Officer? Do you work full time as an Officer?

Was it ever a decision between the three careers of Police Officer, Author and Musician?

How do you find that the three jobs nourish and grow the other careers? Do you take a lot of the lessons learned as one of them and apply those lessons to the others?

What is the most important thing that you’ve learned as a writer?

Would you say that is the same answer for what the most import thing you’ve learned in life is?

If you could pick one song to describe your career as a writer, what song would you pick and why?

When you were a kid did you say: I’m going to be a writer and a cop and a musician or did these careers grow with you?

Of your jobs, do you have a favorite? Do you have a dream that you could quit two or one and focus on a narrower field or do you like things just the way they are?

What’s your most treasured ‘incident’ as a writer with a reader?

What is the worst moment you’ve ever had as an author?

If you were suddenly confronted with an alien ship landing in your backyard would the aliens be friendly or fierce? What would you do next?

How would you describe your life? Is it generally easy, hard or somewhere in-between?

When do you do the most writing?

What’s your worst distraction from writing and how do you fight it?

What is the one thing you would tell yourself as a young writer if you could go back in time and give young you advice?

Is this the same advice you tell young writers when you mentor them now? 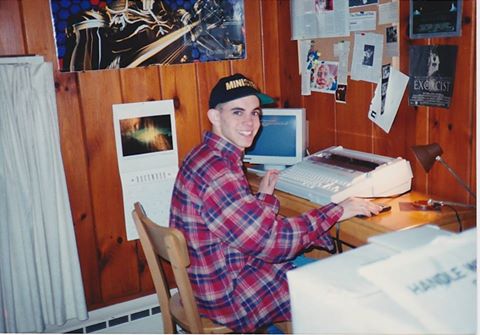